Monrovia, Liberia - On October 10th, Liberians went to the polls in large numbers in the hope of further consolidating peace and strengthening their democracy.

According to National Democratic Institute (NDI) delegation co-leader and Regional Director, Chris Fomunyoh, “These elections mark a historic milestone for Liberia. Given the country’s experience of conflict and developmental challenges, Liberians should take great pride in the electoral process the country has conducted thus far.”

Election day was peaceful and the polls were generally well-conducted. The delegation was impressed by the enthusiastic participation of voters across the country, many of whom waited patiently in long lines to cast their ballots. The delegation also noted that concerted, good-faith efforts will be needed to bring the elections to a successful conclusion. The delegation issued a detailed preliminary observation statement, which builds on two pre-election assessment missions in February and September 2017 2017.

“At every polling place NDI visited we saw voters determined to cast their vote to help shape Liberia’s future,” said delegation co-leader U.S. Senator Gary Peters from Michigan. “It was best summed up by a voter waiting patiently in line who told me, ‘This is our day! I will wait as long as it takes.’’’

Polling officials worked diligently all day and, in most locations observed by NDI’s delegation, adhered to procedures. Liberian political parties recruited, trained and deployed tens of thousands of poll watchers, and NDI observers saw multiple party agents in nearly all polling places observed. Civil society organizations mobilized more than 5,000 citizen observers who were deployed in every electoral district in the country. The presence of party agents and citizen observers contributed significantly to peacefully safeguarding the vote. The campaign leading up to the polls was open and mostly free of violence, and parties and candidates expressed a commitment to a peaceful process.

“What we are seeing in Liberia is a democracy that is getting stronger and deeper each year,” said Senator Ken Nnamani, former president of the Nigerian Senate. “As someone from a country in the region which has invested a lot in Liberia’s future, the enthusiasm and determination shown in this election process was very encouraging.”

In the spirit of international cooperation and in light of a potential presidential runoff election, the delegation offers the following recommendations on steps that can be taken in the short-term to further enhance confidence in the electoral process and foster peaceful, credible polls. In its final report, NDI will offer further, longer-term recommendations to enhance political and electoral processes.

To the National Elections Commission (NEC):

To the Political Parties and Candidates:

To the Security Services:

NDI’s 34-member delegation deployed observers to all 15 counties and was led by:

The delegation observed polling places on Election Day from opening to closing. High-level meetings with the National Elections Commission, government officials, political party leaders and civil society representatives. NDI conducted two pre-election assessment missions prior to the polls and provided recommendations to key stakeholders in statements issued in February and September. In addition, NDI has deployed six long-term observers and four long-term analysts in Liberia since June, who will stay in Liberia through the end of November.

The National Democratic Institute is a nonprofit, nonpartisan organization working to support and strengthen democratic institutions worldwide through citizen participation, openness and accountability in government. Over the last 25 years, NDI has conducted more than 150 election observation missions in 62 countries. NDI first worked in Liberia in 1997, providing technical assistance to Liberian voter education and election monitoring efforts, and has maintained an in-country office since 2003. More information is available at www.ndi.org/liberia. 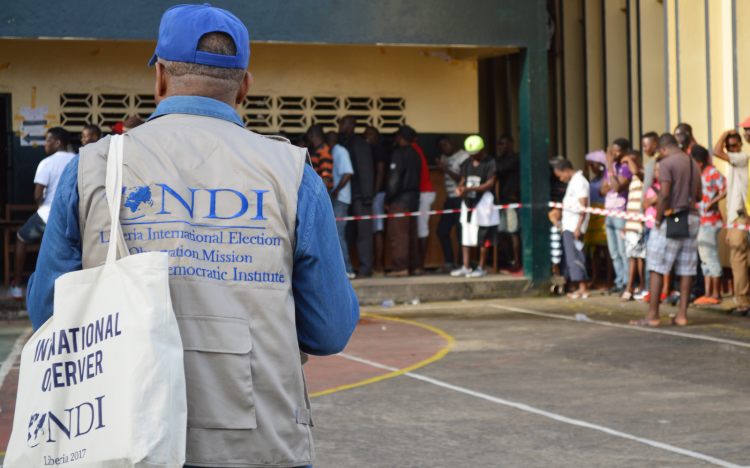