The National Democratic Institute (NDI) condemns the arrest of Maria Ressa, chief executive officer of Rappler, and the continued efforts by the Philippine government to quell press freedom. Shortly after 5:00 pm Manila time today, Ressa was arrested by government officials on “cyber libel” charges. Rappler – the country’s leading independent online news network – has been at the forefront of investigative reporting in the Philippines, including pioneering research globally on the weaponization of social media.

“A free press is an essential ingredient in any democracy, and journalists are often the ‘canaries in the coal mine’ when authoritarians seek to consolidate power against the will of the people,” said NDI President Derek Mitchell. “The Duterte government’s latest move to silence the Philippine media should be seen by the international community for what it is: a warning sign that should not go ignored.”

Under Philippine President Rodrigo Duterte’s administration, Rappler has been subjected to repeated attacks to stifle the work of its journalists. Rappler was indicted on separate charges of tax evasion by the Philippine Department of Justice on November 9, 2018.

Maria Ressa also serves on the advisory board of the Design 4 Democracy Coalition, a growing group of democracy and human rights organizations around the world that is committed to ensuring that the technology industry embraces democracy as a core design principle. Rappler, a recipient of NDI’s 2017 Democracy Award, is one of the organizations at the forefront of the global battle to combat disinformation. Ressa, who accepted the award on behalf of the organization, spoke of the hard work and courage of her colleagues at Rappler: “We are journalists and we will not be intimidated. We will shine the light. We will hold the line.” Along with other journalists dubbed “the Guardians,” Ressa was recognized by Time Magazine’s “Person of the Year” in 2018.

The National Democratic Institute is a nonprofit, nonpartisan organization working to support and strengthen democratic institutions worldwide through citizen participation, openness and accountability in government. 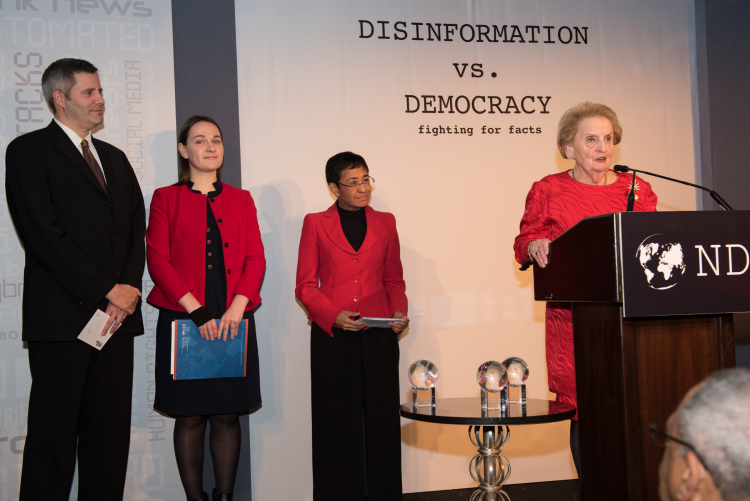