SKOPJE, NORTH MACEDONIA. A new National Democratic Institute (NDI) nationwide public opinion poll in North Macedonia, fielded in the run-up to the official start of the campaign for the July 15 parliamentary elections, shows that voters prioritize economic development and remain concerned about the COVID-19 epidemic.

Since the onset of the epidemic in March, the public’s general outlook has tended to be more pessimistic, with 44 percent of respondents saying the country is moving in the wrong direction. In a previous NDI survey (March 2020), 33 percent of respondents believed the country was moving in the wrong direction.  Economy/living standards overall and employment, in particular, are top-of-mind for one-third of respondents. Another third prioritizes anti-corruption and other rule-of-law reforms. Nearly one-quarter say that COVID-19 is their top concern.

Voter sentiment on the two leading parties/coalitions – SDSM/Besa and VMRO-DPNME — remain largely unchanged from the onset of the COVID-19 epidemic, with closely competing levels of public support ( 9 percent of voters are undecided)

“Voters in North Macedonia have a clear-eyed set of priorities that they will take to the ballot box”, said Robert Benjamin, NDI/Central and Eastern Europe Director. “In a close election, they are evaluating political leadership and party policies on the governance and economic issues that matter most to them.”

Nearly 7 in 10 say that they are likely to vote. Forty-one (41) percent of all respondents express concerns over the democratic conduct of the election process. Forty-six (46) percent profess concerns about health safeguards, but many among them are assuaged by announced Health Ministry protocols. Fifty-six (56) percent are very or somewhat concerned that COVID-19 or election-based disinformation could adversely impact the election results.

Public sentiment has been stable with respect to the 2018 Prespa Agreement, with 58 percent supporting it or deeming it necessary. One-third opposes the agreement. Strong majorities -- at nearly 75 percent -- approve of the country’s NATO membership and joining the European Union.

“At a complex time of difficult challenges and promising opportunities, citizens in North Macedonia want democratic leadership to unite the country and good governance to advance reform”, said Heaslet.

NDI conducted the public opinion face-to-face survey between June 12 and 21, 2020 with a national representative sample of 1,213 respondents age 18 and over. The poll carries a margin of error of +/- 2.8 percentage points with a 95 percent confidence level. The research and analysis were conducted by Team Institute and Starr Opinion Research on behalf of NDI. Polling data is not predictive of election results. 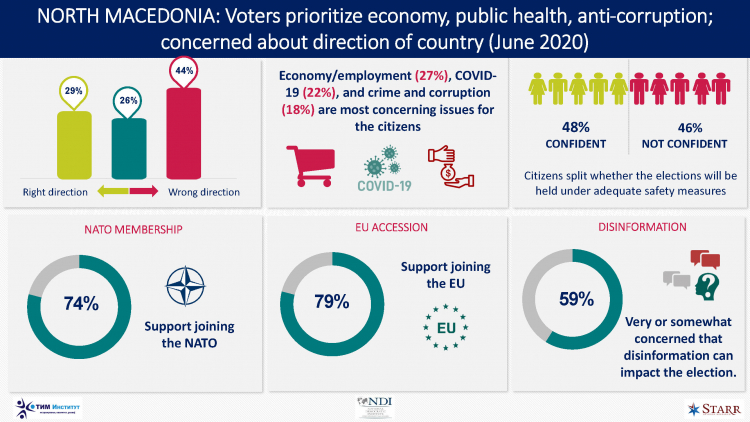