Kyiv, Ukraine – For the third time in four months, Ukraine held elections that were competitive and credible, further confirming its democratic progress, according to the assessment of a high-level delegation of international observers organized by NDI.

This preliminary statement is offered by the National Democratic Institute (NDI) election observer delegation to Ukraine’s July 21, 2019 snap parliamentary elections. The delegation, which included observers from 10 countries, was led by:

"The success of Ukraine’s efforts to establish a prosperous, independent and democratic future is of vital importance to global security and well-being. The democratic nature of these elections provides a strong foundation for the consensus-building that will be necessary to form a government and begin enacting difficult reforms,” said John Bruton. “The new majority party or coalition will need to work on cross party engagement, and seek counsel from political newcomers and veterans alike.”

"With five well-conducted national elections since the Revolution of Dignity in 2014, Ukraine has demonstrated the technical capacity and political will to effectively manage electoral administration, campaigns, and election day procedures,” said Audrey Glover. “The more pressing challenges ahead relate to factors that even more established democracies are struggling to address, including the role of the media, campaign finance reform, gender equity and inclusion of marginalized groups, and full enfranchisement of voters.”

"Most impressive has been the transformation among Ukrainians themselves, who have consistently demonstrated their desire to be engaged in public life and hold their leaders accountable, and who are committed to a democratic and European future. They are optimistic and have high expectations of the new parliament,” said Christine Todd Whitman. “These attitudes represent valuable assets, as well as significant responsibilities, for the new parliament.”

"Despite a war and a punishing timeline, government officials, election administrators, political parties, candidates, election observers, and citizens combined efforts on a process that complies with Ukraine’s laws, meets international standards, and reflects the will of voters,” said Laura Jewett. “This is a remarkable achievement.”

In the spirit of international cooperation, the delegation offers a number of recommendations for improvements that could be implemented before the next election. These include:

The delegation would like to stress that this statement is preliminary in nature. The official results are not yet finalized, and any electoral complaints that may be lodged are yet to be adjudicated. NDI will continue to monitor electoral processes and may issue further statements. The delegation recognizes that it is the people of Ukraine who will ultimately determine the credibility and legitimacy of their elections. This statement builds on the findings of seven long-term analysts and the ongoing work of NDI’s office in Ukraine, as well as a joint NDI and European Parliament pre-election assessment delegation statement issued in November 2018, and NDI’s statements on the first and second rounds of the presidential election in March and April 2019.

NDI has organized international observation missions or assessments in more than 65 countries for more than 135 elections, including 12 assessments in Ukraine since it began working in the country in 1992. The NDI observer missions conduct activities in a nonpartisan and professional manner in accordance with Ukrainian law and the Declaration of Principles for International Election Observation. The work of this mission is made possible with the support of the U.S. Agency for International Development (USAID). 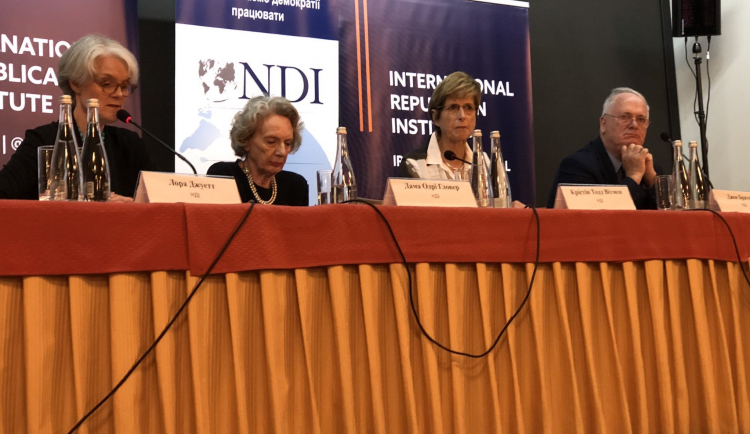 For the third time in 4 months, Ukraine held elections that were competitive and credible, further confirming its democratic progress, according to the assessment of high-level delegation of international observers organized by NDI.