“Since the Revolution of Dignity, the Ukrainian people have intensified their commitment to achieving a fully-functioning democracy” said the delegation. These elections “will test whether the country’s institutions and leaders are keeping pace with the people’s desire for change.”

The delegation assessed that countering Kremlin interference must be a top priority, and that social media and digital platforms have a responsibility to help Ukrainians in this endeavor. For citizens to make informed choices, all campaigns and candidates should have equitable access to the media and the harmful effects of disinformation must be mitigated. Efforts should be taken to strengthen the bodies and organizations responsible for preventing political corruption and curbing the role of money in politics. The delegates expressed concern about violence and intimidation of politicians, journalists and civic activists. They noted that the maintenance of national cohesion will depend on campaigns that are constructive, seek to unite rather than divide, and respond to the aspirations of the Ukrainian people. Ukrainians clearly support greater equality between men and women, so the delegation urged attention to the underrepresentation of women in political life.

The delegation offered a series of recommendations, including:

“A transparent, credible election process would reinforce Ukraine’s democracy,” said the delegation. “It would also inspire those working for democracy throughout the region.”

The delegates met with prospective candidates, government and political party leaders from across the political spectrum; electoral authorities; civil society organizations; media representatives; and representatives of the international and diplomatic communities. Beginning in December, NDI will deploy a team of long-term analysts to continue monitoring the themes raised in this report. This will be supplemented by an international election day observation delegation. The NDI mission is funded by the U.S. Agency for International Development.

The NDI and European Parliament delegation conducted its activities in accordance with the Declaration of Principles for International Election Observation and Code of Conduct. 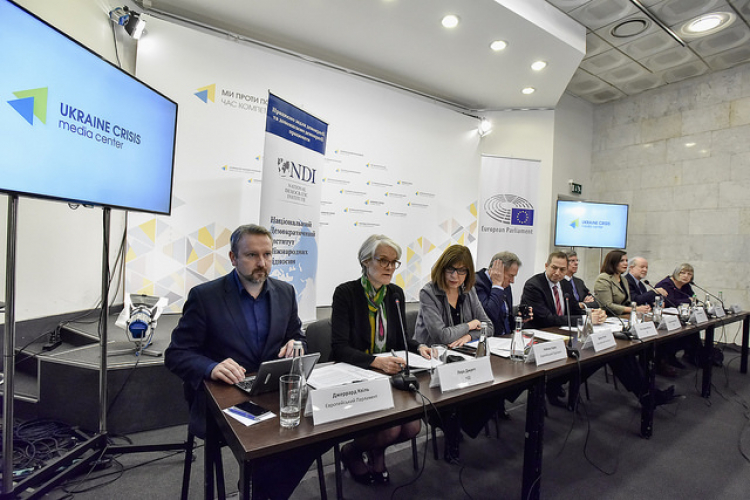 At a press conference, a joint pre-election assessment delegation of the National Democratic Institute (NDI) and the European Parliament gave recommendations on the upcoming Ukrainian presidential and parliamentary elections.