I want to thank Chairman Engel and Ranking Member McCaul, as well as the Members of this Committee, for allowing me to share my perspective on the challenge to democracy and governance in the wake of the COVID-19 pandemic.

For nearly four decades, the National Democratic Institute has supported democratic development in every corner of the globe. We have done so consistently, through good times and bad, alongside our colleagues at the International Republican Institute, and with the strong bi-partisan support of the U.S. Congress, for which we are grateful.

But today we confront conditions we have not faced since at least the end of the Cold War, if not in the Institute’s history. Even before the pandemic struck, democracy faced increasing headwinds - from weak institutions, corrupt elites, economic underdevelopment, and unscrupulous demagogues. New digital technologies have offered democracy’s adversaries new, powerful tools to inflame, confuse and divide.

And malign rising powers have increasingly deployed their prodigious resources to coerce and corrupt societies toward their illiberal model.

As Secretary Albright just noted, authoritarian systems by their very nature make pandemics more likely, not less. We are reminded, therefore, that democracy is not just right and just, but a matter of national security. The irony is that just as the world needs more open, democratic societies to prevent future crises and respond effectively to the current one, opportunistic politicians on every continent are taking full advantage of the crisis to grab even more power and close political and civic space in their countries, all under the banner of national security.

Eighty-four countries have declared a state of emergency since the pandemic began. Fifty-two elections have been postponed, including 17 national elections. While health and safety risks may require postponing elections for a certain period, the danger is that postponements become extended indefinitely, entrenching elites, hobbling political opponents, disrupting monitoring and oversight, and fostering an undemocratic culture.

In the last month, NDI has conducted two internal surveys of its field staff. The trends we detected were troubling:

While hamstrung by social distancing in virtually every one of our 50+ offices around the world, NDI country teams are finding ways to adapt programming to ensure our partners continue to receive the support they need to preserve and protect their political rights.

Russian disinformation campaigns, increasingly conducted in coordination with China and Iran, are particularly widespread and pernicious, as they focus on instilling mistrust in democracy’s ability to deliver effective responses to the pandemic. These narratives often amplify outrageous conspiracy theories about U.S. culpability; play up deficiencies in the EU’s response; slander vulnerable national minorities as prime carriers of the virus to create social unrest; and falsely tout Russia and China as uniquely responsible regimes helping to stem the pandemic’s spread.

The Russians are also taking full advantage of the world’s distraction to enhance their influence and interests at the expense of former satellite states – by spreading false information in Ukraine about its supposed abandonment by allies; accusing Georgia falsely of being the aggressor in Russian-occupied South Ossetia amidst slow and steady Russian land grabs (“borderization”); and threatening Prague officials with drastic legal action, or worse, for seeking to excise vestiges of the Czech Republic’s Soviet past.

These are all chilling reminders that the era of spheres of influence is not over in the minds of some, and that a post-Cold War order made up of independent, sovereign, democratic states remains fragile at best.

China, meanwhile, continues to use the power of its purse to buy influence with editorial writers, journalists, politicians, political parties, and others across the world to undermine democracy. China’s attempts to undermine the credibility of Taiwan’s January 2020 elections through disinformation, however, did not succeed. In a short film released last month, NDI documented the remarkable partnership forged between Taiwan’s government and civic tech community to combat these attacks - a partnership model worth emulating elsewhere.

As indicated above, Beijing is turning increasingly to Russian tactics of disinformation to erode civic trust within democratic countries, and distract attention from its own culpability for the pandemic. Beijing has used the pandemic as cover to crack down on democratic activists and politicians in Hong Kong, and to falsely accuse NDI of encouraging unrest there. NDI has worked transparently in Hong Kong for more than two decades, and since 1997, has regularly issued reports on Beijing’s progress toward fulfilling the promises made under the territory’s Basic Law and “One Country, Two Systems” framework. After the latest version of the report was released two weeks ago, a spokesperson in Hong Kong denounced the report, and threatened obliquely that NDI would “pay the price” as a result.

The COVID-19 pandemic in the end has resulted in a “health” crisis in every sense of the term – in economic, political, and social terms just as much as physical terms. Some are calling the COVID-19 crisis an inflection point for democracy. If so, democracies must use this moment to bend the curve their way. Highly resourced and motivated authoritarian powers are exploiting the current climate of fear and insecurity to shape a world in their image and interest. They are playing a weak hand, but right now they have the advantage of initiative.

U.S. leadership is essential to take back that initiative, by joining with democratic allies to speak out against the degradation of democracy by authoritarian opportunists, call out the malign international activity of China, Russia, and others; offer an alternative source of international assistance that invests rather than extracts from developing nations, and empowers citizens with the tools necessary to ensure their governments answer to them rather than the other way around.

NDI and our global partners will continue to do our parts to bend the curve the other way – to affirm the essential dignity of every individual, and sovereign independence of every nation, to chart their own path forward without interference. I want to thank members of this Committee again for your support of NDI’s work over nearly four decades, and in particular for holding this discussion today during this extraordinary moment of crisis. 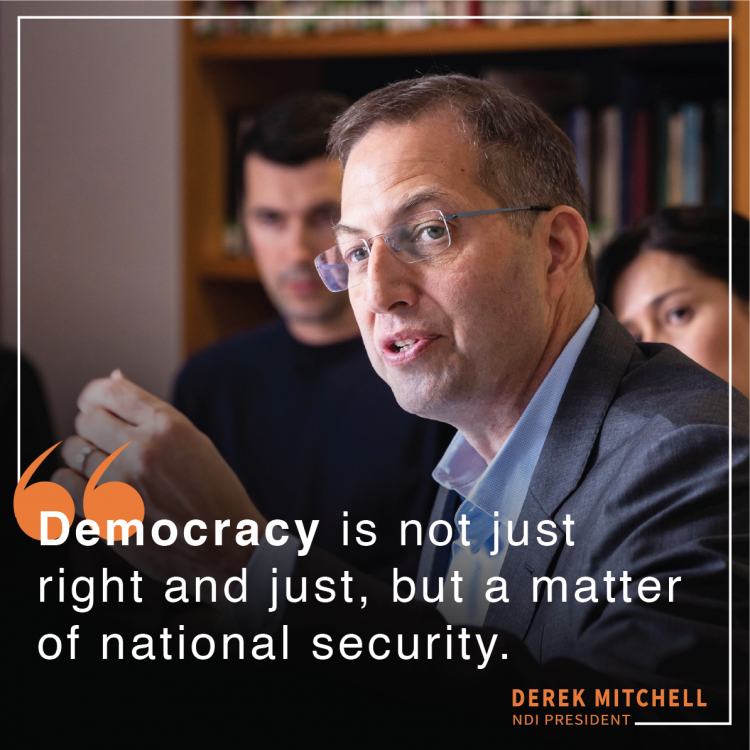