As NDI has observed around the world, greater political polarization and extremism, together with computational propaganda and disinformation – have damaged public confidence in democratic institutions. As part of its global INFO/tegrity initiative, NDI is supporting the use of tools and research to strengthen the center in political discourse, seeking to rebuild public trust and confidence in democratic institutions and processes. In Central Europe, youth increasingly turn to non-mainstream or radical political options. Mainstream political parties in Central Europe struggle to reach young voters who increasingly turn to non-traditional media sources and who represent a constituency particularly vulnerable to the rising illiberalism in the region. To explore the political attitudes, values, sources of information and political participation of young people in Hungary, Poland, and Slovakia, NDI conducted a public opinion poll of youth aged 16 to 29  in cooperation with research partners based in each country. The research examines in particular relationships among three dimensions: democratic disaffection, Kremlin-based influence and European Union affairs; and nationalism, illiberalism, and populism. In doing so, the research explores the complex interplay between youth attitudes, values, political participation, and perceptions of democracy.

In Poland, NDI conducted a public opinion poll in cooperation with the Institute of Public Affairs (IPA). Survey data was collected through telephone CATI interviews from December 7-20, 2017 from a sample of 500 citizens of Poland, ages 16 to 29. The margin of error is + 4.5%, with a 95% confidence level. The same research was conducted in Hungary and Slovakia. Key comparative results are included in this publication. This research in all three countries will be combined with focus group and empirical research in a comparative study.

This research is funded by the United States Agency for International Development (USAID). 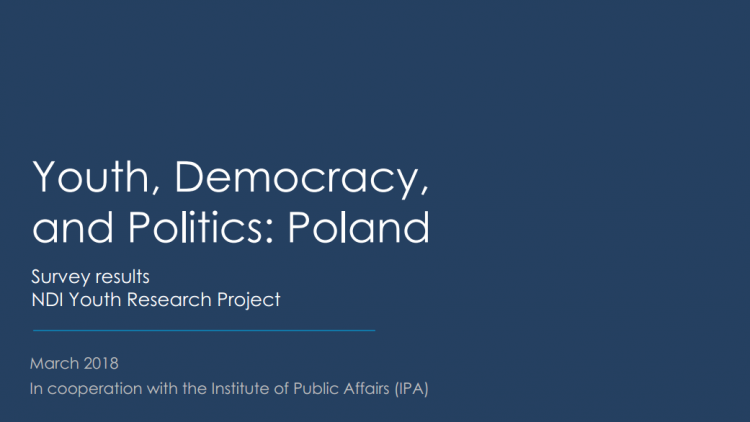