With advancements in data collection and management technologies and increased efforts by governments across the globe to open data, information about electoral processes has never been more available or accessible. This includes information like voter registration statistics, candidate nomination information, polling station locations, campaign expenditures, and other data typically housed within government institutions. Such transparency can help keep citizens and stakeholders informed on election procedures and developments. Open data can also be used to promote accountability and improve government performance.

The Open Election Data Initiative (OEDI) from NDI offers civil society, election administrators and technologists with the concepts and tools to effectively advocate for, implement, and use election data that is truly open. Over the years NDI has created numerous tools and guidance documents to help stakeholders in this effort. The Unleashing the Potential of Election Data guide lays out the four guiding elements of electoral integrity, which include transparency, accountability, inclusiveness, and competitiveness, and the nine key principles for making election data open. Fully “open” election data is timely, granular, available for free on the internet, complete and in bulk, analyzable, non-proprietary, non-discriminatory, license-free, and permanently available. The Election Data Guide also details the key categories of election data that are being collected and produced during the pre-election, election day, and the post-election period. The Latin America Data Inventory applies open data principles to elections in countries in Latin America and the Caribbean where electoral management bodies (EMBs) and governments took steps to “open up” their data, and illustrates how open data principles translate into practice. The OEDI Election Data Academy provides users with hands-on modules and exercises on how to analyze real election datasets, such as polling station lists, ballot qualification data, and voter registration data, once they have been obtained in an “open” format.

The Beyond Transparency: Planning, Attaining, and Using Open Election Data in Citizen Election Monitoring tool seeks to support citizen monitors to integrate an open election data strategy into their broader observation effort. It outlines specific strategies that observer groups can employ for open election data collection, analysis, and advocacy and highlights various challenges that monitors may face along the way. The tool is made up of six steps that provide strategies for implementing an open election data plan according to the specific country and electoral context and monitors’ capacities. The first step defines the overall observation strategy by helping users define their priorities and objectives for election monitoring, which will structure the strategy for open election data plans. Next, users will think through what data is available, where to find it, and how it may look. In the third step, users will develop and finalize a data analysis strategy tailored to their priorities, capacities, and timelines. In the last three steps, users will work through key considerations for obtaining election data, including methods for requesting data from electoral management bodies, and consider the ways users can monitor success of their open data strategy. 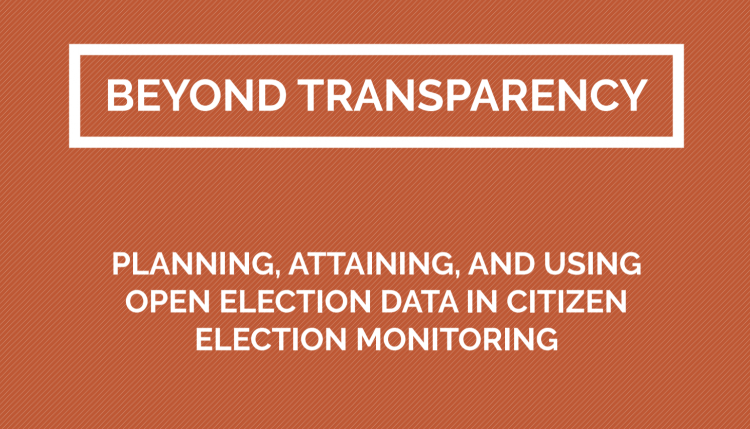