Kyiv, Ukraine – Ukraine’s first-round presidential election was competitive and credible, according to the assessment of a high-level delegation of international observers organized by NDI, despite the long-standing need for electoral reforms (download the full statement in English and Ukranian). The 36-member delegation met with party and campaign representatives, government and election officials, as well as representatives of civil society, the media and the international community. On election day, they observed opening, voting, counting, and tabulation processes in Kyiv and 13 other regions across the country.

“For the second time since the Revolution of Dignity, despite ongoing Russian aggression, Ukraine held an election that broadly reflects the will of voters and meets key international standards,” said former U.S. Ambassador to Ukraine William Taylor, who co-led the delegation. “However, many important opportunities to protect the credibility of the electoral process should be addressed ahead of the second round.”

Since no candidate won an absolute majority of the votes cast, a second round between the two frontrunners – Volodymyr Zelenskyi and Petro Poroshenko – is scheduled to take place on April 21. NDI will also be fielding a second international observation delegation to assess this runoff election.

“Ukraine has many of the necessary ingredients for credible elections,” said Audrey Glover, chairman of the Foreign Policy Centre and former director of the Organization for Security and Cooperation in Europe’s Office of Democratic Institutions and Human Rights (OSCE/ODIHR);. “Ukrainians demonstrated their resilience and overwhelming commitment to a democratic future through their constructive, peaceful participation in this election, but reform is needed to the judicial system and corruption needs to be urgently addressed.”

Ukraine has an adequate legal framework, an open media environment, respect for basic freedoms, and a vibrant civil society. The political landscape is fundamentally competitive. At the same time, the process highlighted underlying problems, some new and some long-standing. During the campaign, many candidates appeared to set the stage to contest the outcome by preemptively discrediting the process. These efforts amplified Russian narratives. Other key challenges relate to shortcomings in the election law and concerns about the transparency and impartiality of election administration; abuses of resources and power, including politicization of state institutions; failures to promote equality between men and women and inclusion of marginalized groups; unequal access to traditional media; and disinformation in offline and online media sources. Many of the more persistent challenges have readily available solutions. Future progress in these areas will depend on political will.

In the spirit of international cooperation, the delegation offers a number of recommendations for improvements that could be implemented before the next round. These include:

NDI has organized international observation missions or assessments in more than 65 countries for more than 135 elections, including eleven assessments in Ukraine since it began working in the country in 1992. The NDI observer missions conduct activities in a nonpartisan and professional manner in accordance with Ukrainian law and the Declaration of Principles for International Election Observation. The delegation built on the work of NDI’s pre-election assessment mission conducted in November, the findings of long-term analysts who have been in Ukraine since January, and the work of local partner organizations. The work of this mission is made possible with the support of the U.S. Agency for International Development (USAID).

NDI is a nonprofit, nonpartisan organization working to support and strengthen democratic institutions worldwide through citizen participation, openness and accountability in government. For more information about NDI and its programs, please visit www.ndi.org. 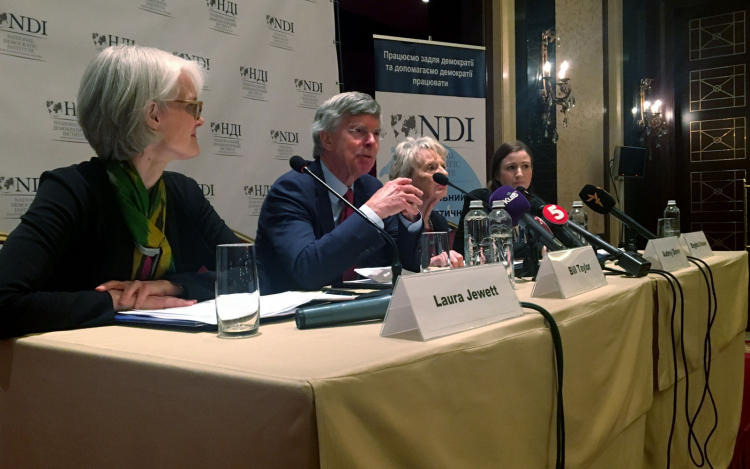 At a press conference, delegation leaders summarize the finding of the international observation mission to Ukraines March 31, 2019, presidential election.