“The people of Zimbabwe turned out on Election Day in great numbers, demonstrating their desire for their voice to be heard,” said Former Liberian President and Nobel Peace Prize laureate Ellen Johnson Sirleaf. “While the elections were peaceful and well administered, there were problems especially in densely populated areas in Harare including long lines and confusion among some voters about which sub-polling place was theirs.”

Zimbabwe’s July 30 elections presented the country with a historic opportunity to break with the past 18 years of political crisis and mark the beginning of a genuine democratic transition. The delegation noted several improvements to the electoral process compared to Zimbabwe’s past elections, though equally important problems gave rise to deep concerns that the process thus far has not made the mark.

“Every election must be seen in its context,” said former Interim President of the Central African Republic Catherine Samba-Panza. “This weeks’ elections took place in the context of 18 years of repressed political rights, deepening economic pain, a history of rigged voting, and the ghost of the 2008 election.”

As the election is presently incomplete; IRI/NDI will continue its observation and may issue further statements as warranted.

“Election Day is only a snapshot of a long electoral process,” said Congresswoman Karen Bass. “It is vital to see the electoral process to its conclusion, and it is still too early to make an assessment on the nature of these elections.”

The delegation’s most critical recommendations called for:

“No matter who wins the elections, those who seek to establish a democratic Zimbabwe will have to peacefully unite the country and find a way to work effectively with their political opposition and civil society,” said former U.S. Assistant Secretary of State for Africa Ambassador Johnnie Carson. “The 2018 elections are but one critical step in taking that path.”

“The overall health of Zimbabwe’s democratic transition requires a strong multi-party system, a free and vibrant press, and for Zimbabweans to actively engage in creating a responsible and accountable government,” said former U.S. Assistant Secretary of State for Africa Constance Berry Newman. “IRI and NDI standby to help the people of Zimbabwe.”

IRI and NDI have organized more than 200 international election observer missions around the globe, earning a reputation for impartiality and professionalism. In Zimbabwe, the IRI-NDI mission conducts its activities in accordance with the Declaration of Principles for International Election Observation and Code of Conduct launched at the United Nations in 2005 and will base its findings on international standards for elections. The mission’s approach is consistent with regional instruments to which Zimbabwe has agreed, including the African Union Declaration on the Principles Governing Democratic Elections in Africa and the SADC Principles and Guidelines Governing Democratic Elections. All activities are conducted on a strictly nonpartisan basis and without interfering in the election process. 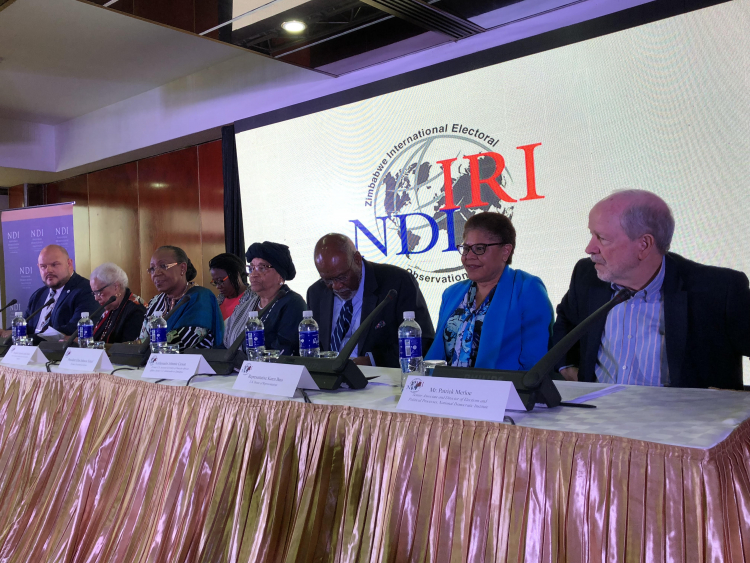