Washington, DC – In honor of former NDI Chair Madeleine Albright’s lifelong mission to make democracy work, the National Democratic Institute (NDI) will re-name its annual Democracy Award in her honor. As the NDI family continues to mourn the passing of its Chair, who led the organization for more than two decades, the “Madeleine K. Albright Democracy Award” will institutionalize Madeleine’s legacy by honoring new generations of democracy leaders and activists worldwide in years to come.

“Madeleine’s vision is deeply ingrained in the foundation of NDI after decades of relentless support, including as Vice Chair at NDI’s founding,” said Board Chair Tom Daschle. “Re-naming this award after Madeleine is an enduring reminder of her unparalleled significance to NDI’s work, and the importance of her voice and example as a continuing inspiration to new generations of small ‘d’ democrats everywhere.”

Previous recipients, dating back to 1986, include Archbishop Desmond Tutu, Liberian President Ellen Johnson Sirleaf, (then) Senator Joseph Biden, Secretary of State Hillary Clinton, Rappler (Maria Ressa) of the Philippines, StopFake.org of Ukraine and other luminaries on the forefront of democratic activism globally.

The 2022 recipient(s) will be announced at a gala event this fall.

NDI President Derek Mitchell said, “Madeleine would want us to confront today’s authoritarian challenges to freedom, dignity and equality with creativity, grit and urgency. This annual award in her name will demonstrate our ongoing gratitude to her leadership and vision by recognizing global leaders who rise to her clarion call and champion a democratic future.”

NDI will continue to seek ways to embed Madeleine into the fabric of the Institute in coming months. NDI has also established the Madeleine K. Albright Democracy Fund to honor her legacy and support NDI’s efforts to uphold the principles our late Chair held most dear in her life – protection of democracy worldwide and every individual’s equal right to a voice in their future. The fund will focus on building democratic solidarity across cultures and borders, and respond urgently to the rise of authoritarianism around the world. 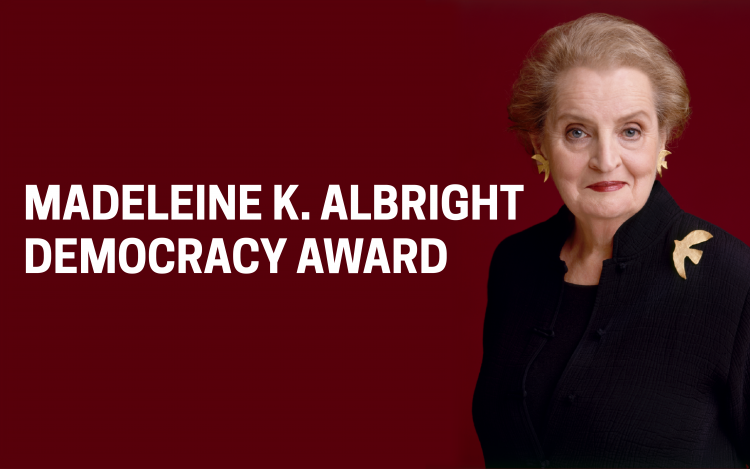