At the time of her passing, her family released a statement, which we attach here.

"Secretary Albright has been an inspiration to me for many decades,” said NDI Vice-Chair Tom Daschle. “Her life story, her remarkable career in public service, and her leadership in promoting democracy at home and abroad has been uniquely historic. She has been an extraordinary role model for all of us who seek to make a difference."

“I could never keep up with Madeleine’s energy in all the adventures we had together,” said NDI Board Vice-Chair Marc Nathanson. “We laughed together and conspired together over the years on behalf of NDI. I cannot think of her without a smile on my face and joy in my heart.”

"In losing Madeleine Albright we have lost one of the most tenacious, mission driven, generous leaders for democracy this planet has ever seen," said NDI Board Vice-Chair Harriet (Hattie) Babbitt.

“Madeleine was indispensable to me and to NDI, as she was to America and the world,” said NDI President Derek Mitchell. “She was a historic figure who inspired millions, but we knew her simply as a friend, mentor, colleague and, ultimately, our leader.  Words cannot express how much we will miss her.”

Chair Albright was present at the creation of the Institute four decades ago, when she served as the Institute’s founding Vice-Chair.  She helped shape NDI’s outlines from its earliest stages, when the idea of a U.S. political party institute helping to build the “infrastructure of democracy” around the world were just words on a page.

After serving historically as the U.S.’s first woman Secretary of State from 1997-2001, she returned to NDI to serve as our Chair until her passing.

For many, Madeleine Albright was NDI.  Though of course she was more than that: professor, scholar, author, advisor to U.S. presidents, businesswoman, and forever the activist/diplomat.

She would often say if she couldn’t be Secretary of State, she wanted to be Chair of NDI.  We were always proud and humbled by those words.

But she backed up her words with action.  She served on innumerable NDI election observation missions in every corner of the globe (including Ukraine), counseled and inspired countless women, young people and others to get politically involved, and was ready to carry the NDI flag at any time and for whatever purpose required to advance our institutional goals.

As an immigrant, she loved her adopted country fiercely. But there was also no one more fearless in her determination to speak truth to power, and undaunted in calling out dangers to democracy with equal candor wherever they arose – including at home.

Now we must find a way to carry on without her, at a time when her urgent, principled voice is needed more than ever.  These are perilous times, akin to the days that shaped her life as a child in war-torn Czechoslovakia.

But our Chair liked to call herself an “optimist who worries a lot.”  So must we all carry on, guided by that same determined spirit, and the other qualities she embodied: unwavering grit, energy, humor, integrity, commitment to principle, and a confident focus on the future, never doubting that the democratic cause on which we at NDI are embarked is a noble and just one.

Thank you, Madam Chair, Madam Secretary.  We miss you, we love you, we will carry on, we will prevail in the cause of your life, and we will always cherish all you gave our beloved Institute and the world during your time with us. May your memory truly be a blessing. 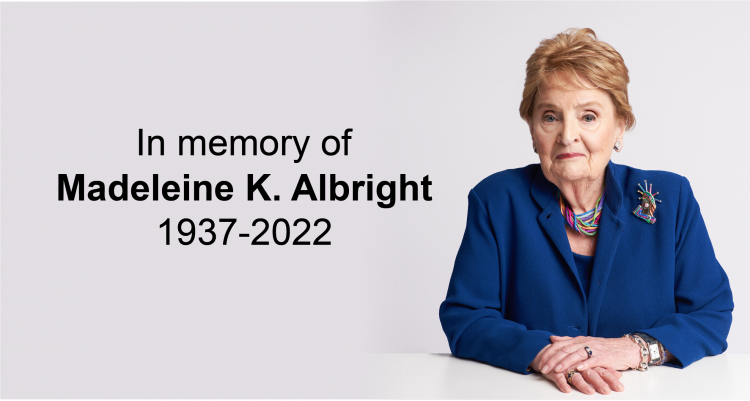