After 20 years of civil war between the region of Bougainville and Papua New Guinea (PNG), Bougainville voted for independence from PNG in a 2019 referendum conducted as part of a peace agreement ending the conflict. Since then, the PNG National Government and Autonomous Bougainville Government (ABG) have embarked on a post-referendum consultation process to decide the political future of the province. However, ample public consultation, including by women, youth, and interest groups, would be needed to guarantee buy-in and lasting results of the peace process. As the intergovernmental consultations on the future of Bougainville are steadily progressing, women call for more inclusion in the talks.

To better understand the state of women’s inclusion in the consultations, NDI, with support from USAID, conducted a qualitative assessment that aims to provide women’s groups and other civic activists an overview of the structure and achievements of the post-referendum consultation process to date. This assessment also seeks to capture insights on public views of the successes and challenges of the process, including women’s participation at all levels of engagement and expectations from the international community. The assessment, conducted from January to September 2021, included key informant interviews and focus group discussions in Buka (the interim capital of ABG) and Port Moresby (the capital of PNG), a workshop with government and civil society leaders from Bougainville and PNG in Port Moresby, and a document review. Below are the key findings.

Increased communication between the National and Bougainville governments is seen as a sign of improving mutual trust and political commitment to advancing the outstanding matters of the peace agreement. In the absence of a broad shared understanding of the timeline and the anticipated outcomes of the consultation process, even just having a process in place is viewed as a step in the right direction. However, this positive development is seen as fragile and dependent on political circumstances, including the results of the next elections in June 2022.

The consultation process is taking place against a backdrop of sharpening economic stress in the context of COVID-19 and increasing demands for public services, strengthening rule of law, and mitigating the risk of reemerging localized conflicts. Some Bougainville-based participants see independence as the prerequisite to addressing the province’s long-term governance, socio-economic, and security issues. For others, the main challenges—namely building a well-governed and self-reliant country—lie beyond independence and are chiefly the responsibility of Bougainville’s leaders. Additionally, some Bougainville participants stressed the importance of keeping the province’s population on board by enhanced communication to ensure that their initial buy-in continues to remain strong.

Bougainville participants praised the ABG’s efforts to design an inclusive intraregional process. Multiple avenues—including a leaders’ forum and independence-ready committees—have been created for leaders of the non-government sectors, including veterans, churches, civil society, youth, women, and the private sector, to participate in decentralized, regional forums where voices outside of the capital can contribute. Some would like to see this approach translated to the intergovernmental talks as well.

Though participants hold mixed views on the gendered nature of consultation priorities, there is consensus, in principle, about the value of having women at the consultations table to ensure fair representation and better outcomes. Additionally, some consider that consultations moderated by an international, impartial figure would lead to more inclusive discussions overall, where women and civil society would be recognized and given more opportunities to speak during official meetings, which are sometimes seen as dominated by male, government voices. Some women participants would also feel encouraged if a moderator and government officials explicitly acknowledged the importance of having women in the talks, which would bolster women’s confidence to speak up.

Including more women can lead to improved outcomes, public outreach, and can reduce the risk of renewed conflict. Women demand the inclusion of more women’s voices in the consultation process to increase its legitimacy and buy-in. Women are also seen as having more integrity and motivation to observe the consultation process than their male counterparts. In some participants’ views, due to their unique roles in their families and communities, women can contribute to conflict prevention by neutralizing tensions early on.

Participants see a need to build women’s capacity to effectively fulfil high-level representation and consultation roles and call on development partners to cascade capacity building, such as negotiation skills and policy making at the community level, to avoid further exclusion. Women-led local civil society organizations in Bougainville are seen as active, but there doesn’t seem to be a clear pathway to influence the consultations. There are concerns about a lack of opportunities for women to develop their civic participation skills and practice leadership, which are also shared by focus group participants in Port Moresby. They talk about a need to strengthen information exchanges between women’s groups and delegations, to encourage the consultation parties to raise gender issues and protect women’s rights, and create more avenues for advocacy outside the PNG parliament, which has no women members at the moment. A few participants also mentioned dissention and a lack of solidarity among women's organizations and leaders as a cause for their limited voice and impact in the consultation process.

The international community remains an important pillar for the inclusion of women and marginalized groups in PNG’s transitional processes. Women participants in particular suggest continuing to build on inclusion successes in Bougainville by further supporting the elected members of the parliament in a push to open the national parliament to more women MPs. Additionally, international partners are seen as well-positioned to put pressure on the national and Bougainville governments to open space for the participation of marginalized groups. However, at the same time, participants across genders and localities request respect for the Melanesian culture, a long-term engagement, inclusive programming for women, and strategic patience from development partners.

Moving forward, inclusion should be at the heart of the consultations. As  a woman leader in Bougainville explained, “the best possible decision outcome must be one that is achieved because of inclusive decision making. There must be inclusion, and the decisions must promote the wishes of the people. They must promote the decision that people of PNG and people of Bougainville must be happy with. Even if it’s a good decision, but the people do not understand it, that will be a risk for the sustainability of the outcomes that the both governments will come up with. It’s more than making a good decision, it must be an inclusive decision.”

“Evidence-based analysis can help inform advocacy, public policy, and programming aimed at strengthening women’s political participation, democratic processes, and inclusive peace in PNG. The study can serve as a benchmark for future citizen monitoring and provides data for advocacy on women’s inclusion in various consultation bodies. To respond to demand for more support, in the next few weeks, NDI will invite women’s groups interested in strengthening women’s inclusion in the post-referendum consultation process to submit concept notes for process monitoring and advocacy,” said Ancuta Hansen, NDI’s Senior Director for the Pacific Islands. 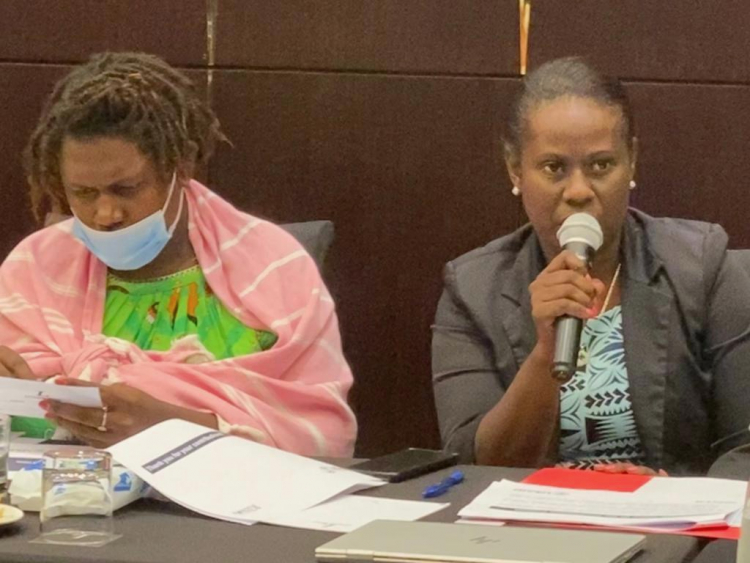 Women's Inclusion in the Post-Referendum Consultations between the National Government of Papua New Guinea and the Autonomous Bougainville Government.pdf