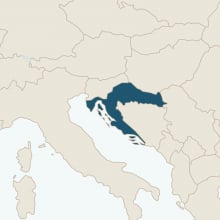 Croatia emerged from the violent dissolution of Yugoslavia to create a democratic political system and earn membership in the European Union and NATO. In the late 1990s, the country wrestled with post-war autocracy, but by 2000 it set forward to create a stable, pluralist political system in which parties alternated power, and a constitutional order that enshrined fundamental human rights to all citizens irrespective of ethnicity. However, Croatia grappled with rule of law and corruption problems, and experienced political instability as a result. It has now created an investigative and prosecutorial body that has successfully pursued, if not contained, large-scale political corruption.

NDI worked in the country for 10 years, from 1994 to 2004, helping to set in motion a political party system anchored by established parties on the right and left. The Institute also helped form a citizens’ group called Citizens Organized to Monitor Elections (which became a leading civic voice in Croatia’s political system), assisted with initiatives spearheaded by the Croatian parliament to improve its lawmaking process and constituent outreach, and supported the country’s sizable ethnic Serb community in political enfranchisement following the re-incorporation of Serb-held areas after the war.

Through regional programming, the Institute now supports reform efforts of political parties and helps them share their accomplishments with partners in neighboring countries.