TBILISI – On November 28, Georgians proceeded to the polls in a second round to directly elect their president for the last time. A delegation of the National Democratic Institute that analyzed the process found that election day was largely orderly but the period ahead of the runoff was divisive and marked by violence and intimidation.

“Democratic governance is Georgia’s most precious asset,” said the delegation. “It has set the country apart from its authoritarian neighbors and made possible the prospects for European and Euro-Atlantic integration. Squandering this asset would have immeasurable costs. It will be critical that Georgia not allow the conduct of this election campaign to define the country’s political life going forward.”

The period ahead of the runoff experienced sporadic incidents of violence, reports of intimidation, and other practices that violated the spirit, and arguably the letter, of election laws. Campaign rhetoric grew even more aggressive and hostile between the two rounds, with messages of fear and threats of instability. The election lacked constructive debate on ideas, values, or visions for the presidency. Allegations of attempted vote buying and abuse of state resources were prominent.

Election day proceeded in a largely orderly and calm manner, with election officials in the majority of stations performing their duties in a transparent manner, according to domestic observation efforts. Georgian voters expressed their will, with a higher turnout, 56.23 percent, than recent elections. There were sporadic, but serious, incidents of multiple voting and manipulation of the count, both directly observed by NDI monitors. The election administration should thoroughly investigate the critical violations during voting and the count.

According to preliminary results, Georgian Dream (GD) supported candidate Salome Zourabichvili received 59.54 percent of the vote, and Grigol Vashadze, representing the United National Movement (UNM) from the eleven-party “Power Is in Unity” coalition, received 40.46 percent. These results appear to be confirmed by the International Society for Fair Elections and Democracy (ISFED) independent parallel vote tabulation (PVT) showing 59.1 percent for Zourabichvili and 40.9 percent for Vashadze. The delegation urges calm while the final results are tabulated and complaints addressed.

“Heading into the 2020 parliamentary elections, it is this delegation’s hope that Georgians will reject the divisive and harmful practices of this election and work to build a more constructive political environment." 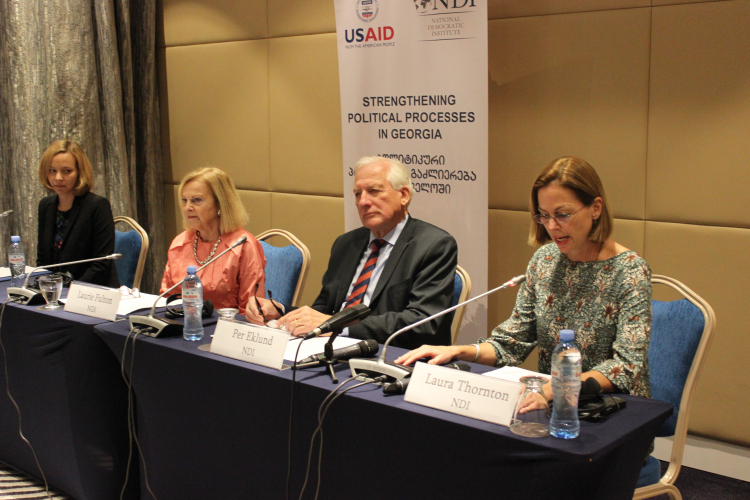