Harare, Zimbabwe – The joint International Republican Institute (IRI)/National Democratic Institute (NDI) Zimbabwe International Election Observer Mission (ZIEOM) acknowledges that the Zimbabwe Election Commission (ZEC) announced results of the presidential election as an aggregate of the provincial votes in the early morning of August 3. Within 24 hours, the ZEC shared polling station level results data in a CD-ROM format in accordance with the recommendations included in the August 2 joint communique issued by the heads of international observer missions in Zimbabwe. The ZIEOM hopes that the candidates and Zimbabwean observers received the same information.

Based on this data, the political contestants and nonpartisan observer groups are now in a position to compare the results released by the ZEC with the results collected by their party agents and domestic monitors on election night. They may also conduct other verification checks.

The ZIEOM also notes that the Zimbabwe Electoral Support Network (ZESN), a respected Zimbabwean domestic monitoring group, released its statistical-based assessment of the results and found them to be consistent with the results released by the ZEC. However, the ZESN assessment also does not preclude the possibility of a presidential runoff election, as the projected number for Mnangagwa ranges from 48.7 to 52.7 of the valid votes cast, and thus any number falling within that range is credible.

The period for filing legal challenges is now underway. Should challenges be filed within the prescribed period of seven days from announcement of the result, the Constitutional Court would have 14 days from the filing to resolve such challenges. Accordingly, ZIEOM will continue to monitor this phase of the electoral process with reference to Zimbabwe’s laws and procedures and to international standards for due process of law.

Per the aforementioned joint communique, the ZIEOM denounces the use of excessive force, which can result in injuries and loss of life, and it condemns electoral-related violence and vandalism. The ZIEOM further expresses deep concerns about police interference with the August 3 press conference organized by the MDC Alliance and calls on the authorities to fully respect the constitutional right to peaceful assembly and expression, while protecting citizens’ personal security and property.  Finally, the ZIEOM asks all sides to use restraint and to ensure that the election process is brought to a peaceful outcome.

On August 1, the ZIEOM released its preliminary statement on Zimbabwe’s presidential, parliamentary, and local government elections. The delegation noted several improvements to the electoral process compared to Zimbabwe’s past elections, though equally important problems gave rise to deep concerns that the process thus far has not made the mark. 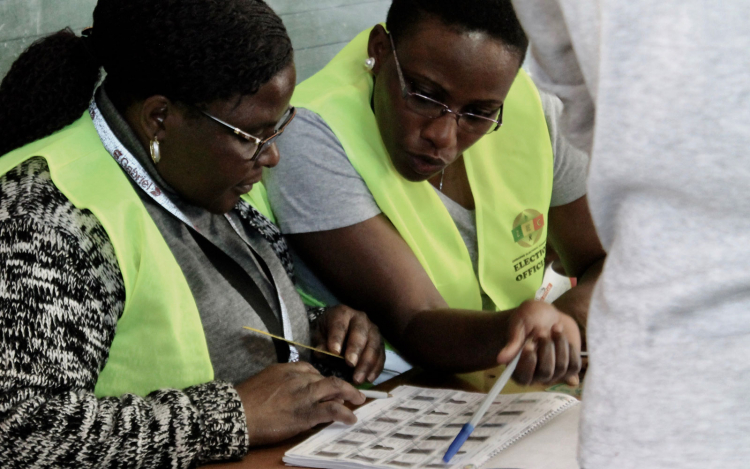