NAIROBI, KENYA -- The National Democratic Institute's (NDI) international election delegation to Kenya's August 8 general elections released a preliminary election statement assessing the credibility of the election. The delegation found that the people of Kenya made their voices heard in a peaceful fashion through credible election processes.

According to delegation co-leader Dr. Aisha Laraba Abdullahi, Former Commissioner for Political Affairs, African Union, “Candidates and their supporters should see the results tabulation process through to its conclusion in a peaceful manner. They should document challenges they might take before the courts. Electoral authorities should complete the determination of the presidential outcome within the seven-day constitutional timeframe in a transparent manner.”

Voters turned out in very large numbers, and they waited patiently in long lines to cast their votes. “The Kenyan people have a lot to proud of. I’d give anything to have a turnout like that back home,” said delegation co-leader U.S. Representative Karen Bass (CA), Ranking Member, Ranking Member, Africa Subcommittee, House Foreign Affairs Committee.

The Independent Elections and Boundaries Commission (IEBC) delivered well-managed polls, even though it faced serious challenges in the few months it had leading to the vote. Late openings in many polling places contributed to waits but did not appear to dent the voters’ resolve. Electronic voter check-in technology worked smoothly in the vast majority of polling places, and election officials worked long hours with determination to carry out their duties according to law.

According to co-leader Christine Todd Whitman, former Governor of New Jersey, “The mood on Election Day was very positive. There were welcoming smiles. Babies on the backs of their mothers had their fingers inked! It was a pleasure to observe.”

Women participated in large numbers on election day and were well represented among the IEBC’s staff, political party agents, and Kenyan election observers. Party agents from competing sides and independent candidate agents, as well as nonpartisan election monitors, were present at the vast majority of polling locations observed. Security officers were deployed at polling locations as well. News media (including Kenyan and international, traditional and digital) provided robust coverage of election developments, which contributed to public awareness and helped dispel rumors.

Electronic transmission of polling station results allowed the IEBC to present the aggregated presidential vote at the national level, though digital display of the corresponding declaration of results forms (Form 34A for each polling station) was significantly delayed, contrary to expectations. Their display would allow candidates to compare copies of the forms provided to their agents at polling stations with the national database in order to confirm data and/or identify inconsistencies. The IEBC pledged that no final presidential outcome will be announced until all electronically transmitted copies of Forms 34A and corresponding Forms 34B from the constituency tally centers are reconciled with their original signed copies. “The problem in publicly displaying the declaration of results forms indicates why it's important to have open electoral data to safeguard integrity,” said delegation co-leader Professor Attahiru Jega, Former Chairman, Independent National Election Commission of Nigeria.

The National Super Alliance (NASA) alleged on August 9 that the IEBC database was hacked on election night, and a large-scale addition of votes for the Jubilee Party’s presidential candidate took place. The IEBC Chairman firmly denied the allegation. The IEBC’s process of comparing original tally sheets, which are legally recognized documents, to the database results should reveal whether that took place and simultaneously preserve the integrity of the process. The verification of polling procedures and results tabulation based on a nationally representative statistical model (commonly referred to as a nonpartisan parallel vote tabulation) conducted by the Elections Observation Group (ELOG) should provide a critical independent safeguard of electoral integrity.

The delegation would like to draw attention to NDI’s August 1 statement concerning the brutal murder of the IEBC’s IT manager Mr. Christopher Msando, where the Institute expressed its deepest condolences and joined with those calling for protection of IEBC staff and a full and effective investigation to bring the perpetrators to justice. “The NDI delegation deplores any violence inside or outside the electoral context,” said delegation co-leader Honorable Justice Yvonne Mokgoro, Former Justice, Constitutional Court of South Africa. “NDI will continue to monitor and to engage with Kenyans working to ensure the integrity of their democratic process.”

The delegation urges Kenyan electoral actors to address immediate challenges during the consolidation of results and to apply lessons from the 2017 elections to benefit the post-election political process. In its final report, NDI will offer further, longer-term recommendations concerning enhancing inclusion in political processes and improving electoral processes. In the spirit of international cooperation, the delegation offers the following recommendations, which it believes would strengthen the Kenyan electoral framework.

To political parties and candidates:

To the Government of Kenya and the Judiciary:

To civil society and the media:

To the people of Kenya: 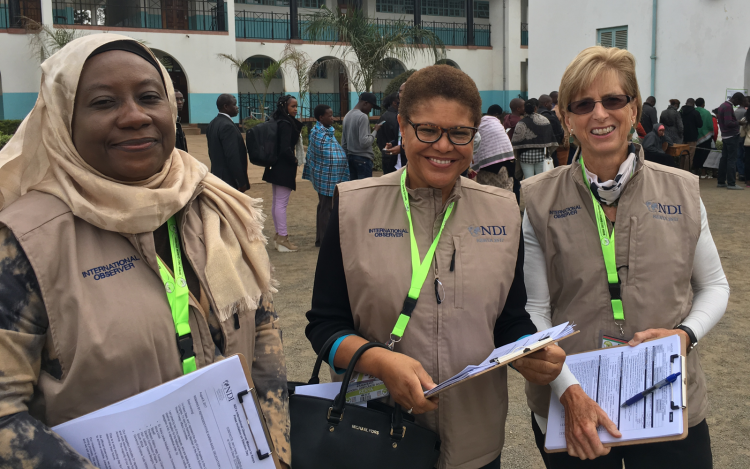