In May 2020, Kosovo citizens were more optimistic than last year about the direction of the country. Longstanding concerns remained unemployment and corruption, now followed by the COVID-19 pandemic and the lack of visa liberalization with the European Union. Violence against women was a major challenge.

A National Democratic Institute (NDI) nationwide public opinion poll in Kosovo, fielded in May 2020, showed that 46 percent of the population expected that the general economic and political situation in Kosovo will improve, despite the pandemic and major political instability during that time.  Belief that the country was going in the right direction moved up to 24 percent in May 2020, up from 14 percent in March 2019.

NDI cautions that opinions from this research represent a snapshot from May 2020 only.

“This poll underscores Kosovo’s ongoing challenges of unemployment and corruption, but also shows a more optimistic outlook for the future, despite the crisis of the pandemic and political turmoil,” said Ambassador Nancy Soderberg, NDI/Kosovo Country Director.  “It also makes clear that the people strongly oppose any territorial concessions as part of a deal with Serbia.”

The public continued to prioritize unemployment and corruption as key issues of concern, slightly up from 2019. The COVID-19 pandemic was the third most-cited concern, with the lack of visa liberalization by the EU fourth, down from last year’s top concern. Belief in the government’s trustworthiness rose slightly compared to 2019, with trust remaining especially high in the Kosovo police, the NATO mission in Kosovo (KFOR), and Kosovo Security Force.

The COVID-19 pandemic disrupted people’s lives, with 70 percent of those surveyed very or somewhat concerned that the virus might cause someone in their family to lose a job. There was high trust that the Kosovar health institutions and medical professionals would provide accurate information about the virus.

The public supported an economic package in response to the pandemic. Respondents were divided on their perceived  level of ethics of current members of the Kosovo Assembly.

Nearly one-third agreed that violence against women is a normal part of politics in Kosovo, with four-in-10 seeing gender-based violence in politics as widespread. “This data tracks with NDI’s media analysis finding that online violence against women has spiked during the Covid-19 pandemic”, said Valon Kurhasani, NDI/Kosovo Program Director.

Kosovo’s citizens were largely united in the belief that Kosovo’s territorial integrity should not be sacrificed to get a deal with Serbia - even if it means slowing down Kosovo’s European and transatlantic integration.  More than 80 percent believed that the US and EU should guarantee Kosovo’s territorial integrity as part of a deal with Serbia. Respondents were divided on whether the future would be better if an agreement with Serbia is not achieved.

NATO,  the US, and the EU all continued to enjoy a very favorable opinion. Maintaining strong relations with the United States remained very important, with 67 percent saying that Kosovo should not follow its own path if it meant spoiling its good relations with the US.  Russia and China are viewed very unfavorably with a shared average of 1.37 on a scale from 1 (very unfavorable) to 5 (very favorable).

NDI conducted the public opinion research using Computer-Assisted Telephone Interviews (CATI) between May 13 and 22, 2020, with a national representative sample of 1,300 respondents aged 18 and over.  The poll carries a margin of error of +/- 3 percentage points, with a 95 percent confidence level. UBO conducted the field research.  NDI regularly conducts public opinion research in Kosovo as part of its long-term support of democratic political processes and institutions, in order to ascertain public sentiment on important issues and to share public priorities and views as registered in the research with government, political, and civic leaders, as well as with the public itself. Public opinion research reflects public opinion at the time conducted and is therefore not predictive. 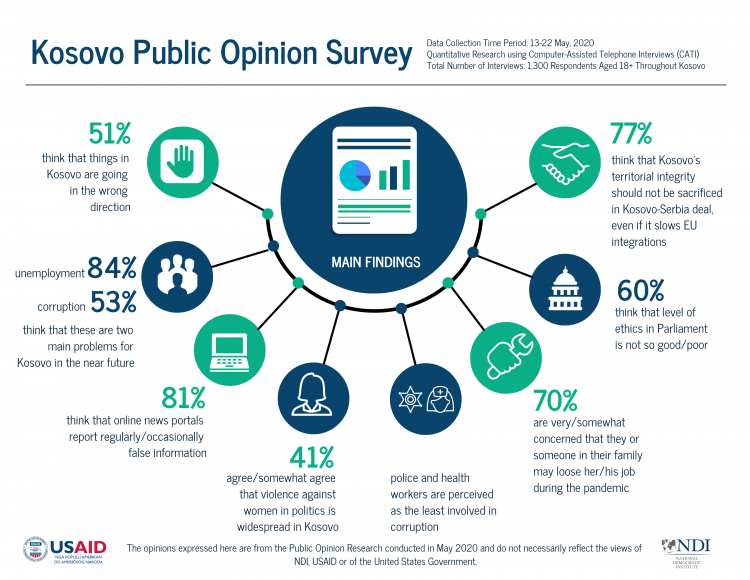