In April 2021, Kosovo citizens were more optimistic than in the fall about the direction of the country. Economic recovery from the Covid-19 pandemic and vaccination against the virus joined longstanding concerns related to unemployment and corruption. Concerns about the safety of the vaccine were high, and belief in false Covid-19 narratives remained, just before Kosovo began its broader national vaccination campaign.

NDI cautions that opinions from this research represent a snapshot from April 2021 only.

“This poll highlights a positive trend: people are hopeful about the future. The challenges of the pandemic, unemployment and corruption continue to hamper progress, but, as trust in government is growing, the opportunity for tackling these problems must be seized,” said Ambassador Nancy Soderberg, NDI/Kosovo Country Director.

The public continued to prioritize unemployment and corruption as key issues of concern. The Economic recovery from Covid-19  was the third most-cited concern, vaccination against Covid-19 the fourth concern and with the lack of visa liberalization by the EU fifth, down from last year’s fourth concern and the top concern in 2019. Respondents cited priorities for the national government, newly elected in February, related to Covid-19 vaccination, job creation, corruption, oversight, and financial assistance. Belief in the government’s trustworthiness rose compared to November 2020.

Trust in major public institutions managing the Covid-19 pandemic, such as the National Institute of Public Health, remained high. Compared to November 2020, more thought the Covid-19 situation in Kosovo was heading in the right direction. Nonetheless, doubts about the efficacy of some prevention measures were high: 68 percent agreed that restrictions on travel and self-isolation will not prevent the spread of the virus. One third did not plan to get the Covid-19 vaccine when one became available, and many expressed concerns about vaccine safety. Trust in online sources of information surrounding the pandemic softened, although around one third believed false narratives like “the virus was created to...reduce the global population.”

In general, people are aware of the spread of disinformation and misinformation as a phenomenon in online media, but they are not resilient to sophisticated disinformation efforts,” said Valon Kurhasani, NDI/Kosovo Deputy Director. “They often fail to fact check or consult sources of information; almost half of respondents are more likely to verify information in their own inner circles.”

Ahead of local elections, now scheduled for October 17, 2021, respondents said they would prioritize mayoral candidates with educational achievement, and tended to trust their mayor as a source of Covid-19 related information.

Few believe that the dearth of women in leadership positions is related to their leadership abilities or toughness; more believe they are held back by men, or discrimination. The public considered violence against women in politics less common than in November 2020; optimism potentially related to the increase of women in public leadership positions following the February 2021 parliamentary elections. Still, 45 percent noted that online harassment is more likely to target and discourage women’s political participation, and 38 percent agreed that the negative portrayal of women in the media is an additional obstacle to electoral success. Nearly four-in-10 saw gender-based violence in politics as widespread.

Kosovo’s citizens were largely united in the belief that Kosovo’s territorial integrity should not be sacrificed to get a deal with Serbia. Nearly 75 percent believed that the US and EU should guarantee Kosovo’s territorial integrity as part of a deal with Serbia, a softening as compared to May 2020. NATO, the US, and the EU all continued to enjoy a very favorable opinion. Russia and China are viewed very unfavorably. Trust in traditional media softened, with growing trust in friends, relatives, neighbors, and colleagues as information sources. 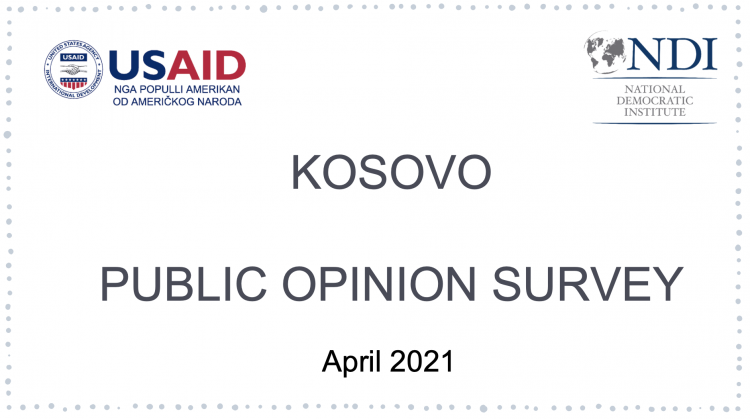