PODGORICA, MONTENEGRO. The National Democratic Institute (NDI) has conducted a public opinion poll in Montenegro in early August on the process leading to the parliamentary elections on August 30. The nationwide poll has a margin of error of +/- 2.18 percentage points with a 95 percent confidence level. Key findings:

> Montenegro's overall direction. Citizens are split over whether Montenegro is heading in the right or wrong direction, arrayed largely along partisan and ethnic lines.

> Election Process/Campaigns. Eighty (80) percent express intention to vote in the elections. A strong majority (87%) across the political spectrum objects to partisan hate speech in the election campaign. Approximately 45 percent of respondents, mainly those supporting opposition parties, fear violations and irregularities that may call into question election results.

> Media. Television is the primary source of information for voters (81%), followed by the internet, newspapers (70%), and social networks (59%). Thirty-three (33) percent of respondents verify news stories within immediate family/social circles. Twenty (20) percent report engaging in online political discussions. Public opinion is divided on whether state media reporting on politics is fair and balanced.

> COVID-19 epidemic. Nearly 80 percent say that Covid-19 transmission risks will not deter them from voting. Combating Covid-19 is seen by the public as the government’s highest priority, albeit at the expense of youth emigration, environmental protection, and media freedom, which the public do not see as top government priorities. Forty (40) percent believe that Covid-19 crisis will take more than a year to overcome.

> Commitment to democracy.  Eight-five (85) percent see Montenegro’s development as a functional democracy to be important.

“Montenegro’s citizens are primed to vote and have clear priorities on jobs and the economy overall, and fighting corruption and Covid-19”, said Robert Benjamin, NDI’s Director of Central and Eastern Europe. “Voters want to cast their ballots safely and expect assurances that the voting and ballot-counting process genuinely reflects their expressed will. Citizens hope that this election will advance Montenegro’s democracy, which they view as extremely important."

NDI conducted the public opinion research through telephone/online interviews between August 7  and August 12, 2020, with a national representative sample of 2,406 respondents aged 18 and older. The research was conducted by Ipsos Strategic Marketing on behalf of NDI. Polling data is not predictive of election results. 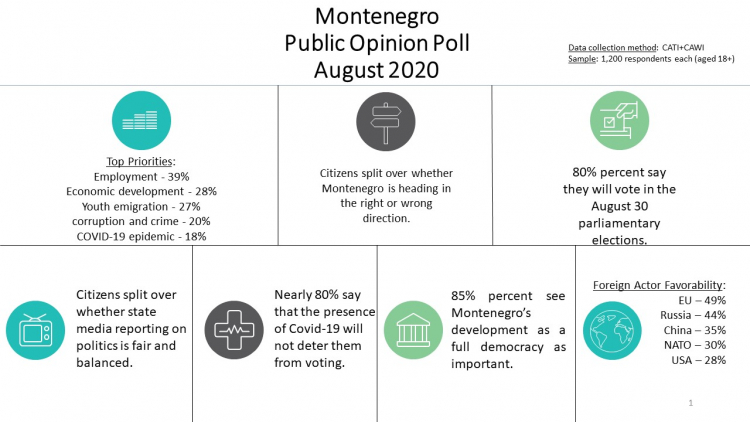