TBILISI – Poll results released today by the National Democratic Institute (NDI or the Institute) and CRRC Georgia find that Georgians see insufficient progress on the top national issues of concern and think the situation regarding poverty, crime, territorial integrity, and education has gotten worse in the last 10 years. Public concerns are consistent across political affiliation, signaling opportunities for political parties to work together to address the common needs of Georgia’s citizens.

New poll finds that a majority of Georgians do not think anyone - neither government or opposition parties - is acting in their best interest. Georgians also remain skeptical of the newly elected parliament’s willingness to address their concerns. More than half of the population (53 percent) does not believe parliament is passing legislation on issues that matter to them, while 52 percent do not believe an MP will take action if citizens tell him/her about problems in their district. Only a third believes that parliament regularly communicates with the public.

“Economic insecurity remains a top priority for the Georgian public and provides a clear direction for Government and political parties to respond. A renewed focus on the issues of top concern is required across the political spectrum through Government, Parliament and local councils.” - says Alan Gillam, NDI Georgia Country Director - “The consistency of the public view on these issues should be seen as a call to action for political leaders who have lost the confidence of the public in representing their interests.”

In light of extreme political polarization, Georgians are supportive of a wide cross-party collaboration. 80 percent agree that their favorite political party should cooperate with all other political parties in the parliament, even if the views of some parties might be unacceptable to them. This perception is consistent across political affiliation. A majority of Georgians believe that domestic actors are best placed to facilitate mediation between the opposition and the government. A plurality (34%) thinks Georgian political parties themselves would make best facilitators during negotiations, while 11 percent find the president as a suitable moderator. Eighteen percent would look to the international community, believing western partners are needed for negotiations.

“The public clearly have stated that the political parties in Georgia need to work together to resolve these challenges. The need for economic recovery, exacerbated by the pandemic, remain fundamental challenges in the upcoming period and should focus the minds of Government and opposition alike.” - says Alan Gillam, NDI Georgia Country Director.

Finally, as Covid-19 continues to dominate the lives of citizens across the world, Georgians praise the Government for doing a good job handling the Covid pandemic (50 percent). What remains alarming is the high level of vaccine hesitancy - 42 percent said they would not get vaccinated; 29 percent said they are already vaccinated, 25 percent said they intend to receive a vaccine. Among those who are hesitant, the main reasons are concerns about the quality of the vaccine (38 percent) and possible side effects for those with pre-existing health conditions (20 percent). 34 percent of vaccinated individuals say they will not get a booster, or are undecided about it.

NDI surveys public opinion to help Georgian stakeholders diagnose and address issues of public concern by providing accurate, unbiased and statistically sound data. This poll aims to capture the most relevant information to foster the development of responsive policies and governance. The results reflect data collected between December 7-13, 2021, through telephone interviews with a nationwide representative sample of Georgia’s adult population, excluding occupied territories, that included 2,099 completed interviews. The average margin of error is +/- 1.4 percent. Respondents were selected using the random-digit-dial method. This poll was carried out by CRRC Georgia. 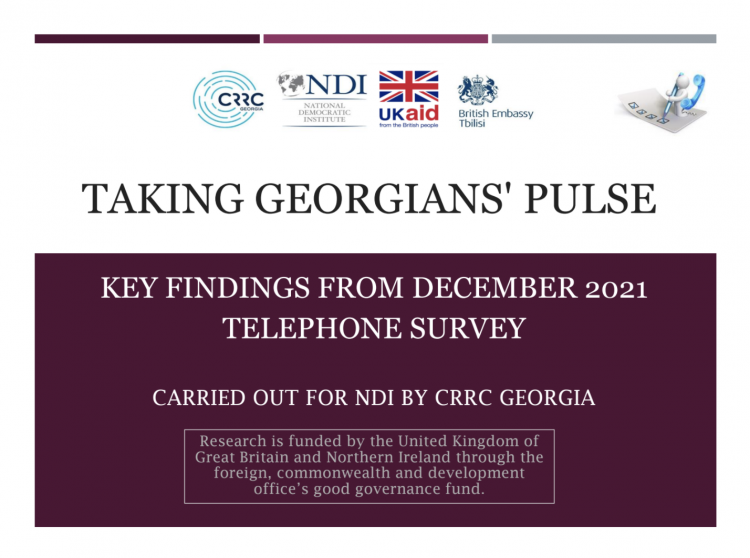