TBILISI – Poll results released today by the National Democratic Institute (NDI or the Institute) and CRRC Georgia show that, despite a small drop in EU support, Georgians remain fully supportive of European and Euro-Atlantic integration. 75 percent of citizens support EU membership, naming the Georgian government's lack of political will as the main barrier (25 percent) preventing Georgia from membership. In a similar trend, 69 percent remain committed to NATO membership. Majority consider Russia and occupied territories as the main barrier for NATO membership. However, new data reveals that a record number of people (62 percent) say Georgia is not a democracy, and moreover not a good example for neighbors (56 percent).

The majority (62 percent) of respondents were aware of June 23rd events and the European Council decision to delay Georgia’s EU candidacy until further reforms were enacted and blamed the Georgian government (56 percent) for not doing enough. While meeting the EU candidacy criteria is important for most citizens (71 percent), only 32 percent are confident that the government will meet these requirements. There is a wide public consensus on the importance of opposition and CSO inclusion, but only a third believe the government will include them in the process.

“Despite a perceived setback on the EU integration path back in June, Georgians are sending a clear message that they remain fully supportive of European integration. The consistency of the public view on this issue should be seen as a call to action for political and civic leaders to focus on the settled will of the Georgian people,” said Alan Gillam, NDI Georgia Country Director.  “The public clearly have stated that the political parties and CSOs in Georgia need to work together to guarantee that Georgia gets EU candidacy status. A renewed focus on economic issues to ensure that the issues of top concern to the public are addressed as they experience hardship and challenges.”

The recent poll also indicates a concerning trend of low public confidence in institutions and political parties.  A majority of Georgians do not think anyone - neither government nor opposition parties - is acting in their best interest. Georgians remain skeptical of the parliament’s willingness to address their concerns. More than half of the population (56 percent) does not believe parliament is passing legislation on issues that matter to them, while 54 percent do not believe an MP will take action if citizens tell him/her about problems in their district. Only a third believes that parliament regularly communicates with the public.

Polarization remains a challenge, as most democratic institutions are thought to be pushing people apart, instead of bringing them together. Georgians believe multiple forces are dividing their country, including politicians (87 percent) and country’s leaders (79 percent), Russia (83 percent), the Georgian media (82 percent), and economic system (80 percent), among others.

“The gulf between the perception of the work of political leaders and areas of public need should be a reminder that the public wish to see their politicians work together to tackle the challenges that citizens face. Restoring trust through positive action in these areas should be a priority above current political bickering.” -  Alan Gillam.

Georgians remain concerned about jobs, rising prices and poverty, with every third adult saying they struggled to buy food in the last 12 months. Citizens also believe the situation regarding crime and territorial integrity has gotten worse. Public concerns are consistent across political affiliation, signaling opportunities for political parties to work together to address the common needs of the Georgian citizens. Looking ahead, the majority of Georgians expect economic decline (66 percent), advancement of pro-Russian actors (58 percent), Russian military aggression (49 percent), and worsened relationship with the EU (44 percent) in the coming year.

NDI surveys public opinion to help Georgian stakeholders diagnose and address issues of public concern by providing accurate, unbiased and statistically sound data. This poll aims to capture the most relevant information to foster the development of responsive policies and governance.  The new report looks at a nationwide survey conducted between July 14 - August 15, through face-to-face interviews with a nationwide representative sample of Georgia’s adult population, excluding occupied territories. The August poll included 2,104 completed interviews. The average margin of error is +/- 2 percent. 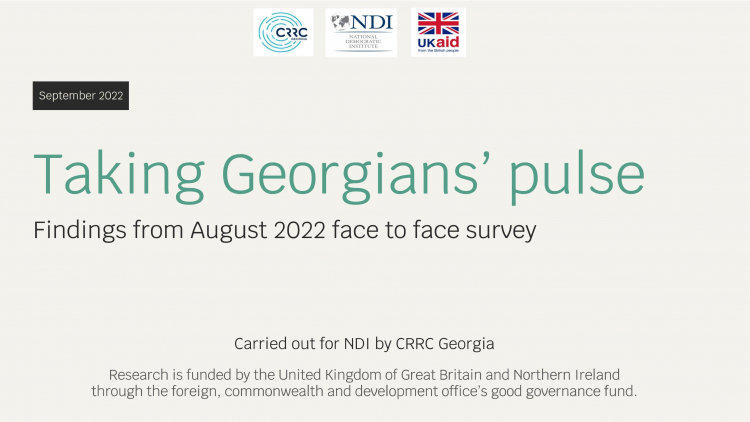