NDI Ukraine’s July 2018 public opinion survey showed overwhelming and stable support for a fully functioning democracy (83 percent). The demand remains strong across all regions of Ukraine with equal justice for all and free and fair elections being the most important characteristics of democracy for Ukrainian citizens.

Support for European Union membership has solidified since the last NDI poll in Ukraine, which was conducted in December 2017. In July 2018, 53 percent of respondents said they want Ukraine to join the EU: 42 percent (an increase from 36 percent in December 2017) only want EU membership, while the remaining 11 percent want EU membership in addition to either joining the Eurasian Customs Union and/or non-alignment. Participants of the focus group discussions, conducted in May 2018 in Kharkiv, Kramatorsk, Kherson, and Odesa, associated the European Union with a high quality of life, freedom, stability, prosperity and rule of law. The overwhelming majority of focus group participants associated Russia with the word “aggressor.”

Top priority issues for Ukrainians remain unchanged. Rising prices, the conflict in Eastern Ukraine, corruption, and healthcare are still the most important issues for citizens. Of the reform priorities, most respondents think reforms related to anti-corruption and removing MP immunity should be the highest priority for the next government.

Those who say their community has gone through the amalgamation process as a result of decentralization reforms have increased from 9 percent in December 2016 to 26 percent in July 2018. Ukrainians who have gone through the process have a more positive opinion of its impact than the rest of the population.

The potential for citizen engagement remains high as Ukrainians want to be involved in decision-making processes. Half of the population indicated that they have or would attend a public meeting if given the opportunity. However, few believe that the government, president or parliament is interested in hearing their opinions (6 percent, 6 percent and 13 percent respectively).

Willingness to participate in the 2019 parliamentary elections has somewhat dropped in the past year. A majority of Ukrainians did not have a voting preference (57 percent). There is no clear leader in the parliamentary contest so far. In terms of the upcoming presidential contest, 53 percent of the population said they do not have a preference, with 56 percent likely to vote. 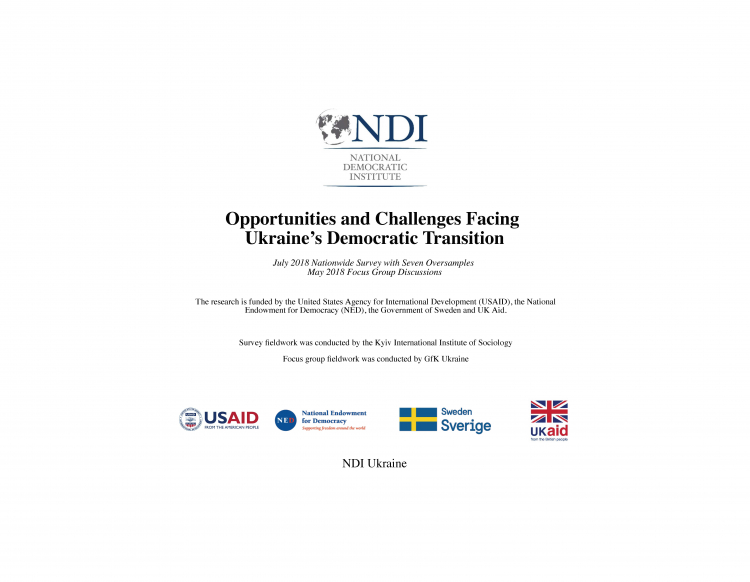