TBILISI – Poll results released today by the National Democratic Institute (NDI or the Institute) and CRRC  Georgia find that Georgians remain concerned about the state of the economy and healthcare. Following months of political crisis and the ongoing impact of the Covid-19 pandemic, the public is pessimistic about the direction of their country and the performance of institutions. Looking forward, Georgians expect their elected representatives to prioritize policies that address their pressing economic and social concerns.

More than a year into the coronavirus pandemic, the state of the country’s economy and the impact of Covid-19  remain at the forefront of citizens’ concerns. Georgians identify jobs, poverty, and rising prices/inflation - all worsened by the pandemic - as the top issues facing them and their families. A majority of citizens (68 percent)  say that they can afford fewer goods, products and services than before the pandemic. Moreover, a quarter of the population reports either losing their job completely (8 percent) or experiencing salary/income reduction (13  percent) since the start of the pandemic; a plurality said they remain unemployed.

Looking ahead, a plurality of citizens (42 percent) believe that the worst of the Covid-19 pandemic is yet to come. Almost half of Georgians (45 percent) said that the vaccination process is going badly. Critically, 42  percent of citizens also feel that they do not have enough information about the vaccination process; the lack of information is especially high in rural settlements (47 percent). More than half of the population says they don’t know how to register on the Georgian government’s online vaccination platform, with 71 percent of rural residents reporting that they are unaware of how to register. Vaccine hesitancy remains high. Only 35 percent would choose to receive a vaccine; 47 percent said they would not. Vaccine hesitancy is most prevalent among people under 55, people living outside Tbilisi, and people of lower economic well-being. Among those who are hesitant, the main reasons are concerns about the quality of the vaccine (47 percent) and how those with existing health issues would be affected by the vaccine (20 percent).

“Ensuring a smooth rollout of the vaccine and making use of trusted medical professionals to provide the public with accurate information will be critical to the government’s effort to safeguard public health. The lack of information can slow down vaccine distribution and prevent citizens from making informed decisions about their health,” said Alan Gillam, NDI Georgia Country Director. “It is incumbent upon all political leaders, but particularly those in power, to rebuild the public’s trust in the country’s governance. In order to do so, it is important to demonstrate that the needs and priorities of the public, such as the economy and healthcare, are being met. Public priorities are consistent across political affiliation, signaling opportunities for political parties  to work together."

The twin challenges of the political crisis and Covid-19 pandemic have contributed to the erosion of trust in the country’s direction and political leaders. Only a quarter of the public believes that Georgia is going in the right direction (23 percent), while only a third believe it is a democracy (35 percent). These represent significant decreases from one year ago in August 2020, where a plurality of Georgians held these beliefs (39 percent and  48 percent, respectively). A similar trend is visible regarding the performance of the government: only a third of Georgians (36 percent) positively evaluate the current government’s performance, a decrease from 50 percent in December 2020.

In the year ahead, the public wants to see the Georgian Parliament focused on the economy, healthcare, and education. Unfortunately, Georgians remain skeptical of the parliament’s willingness to actually address their concerns. More than half of the population (55 percent) does not believe parliament is passing legislation on issues that matter to them, while 54 percent do not believe an MP will take action if citizens tell him/her about problems in their district. Only a quarter believes that parliament regularly communicates with the public.

NDI surveys public opinion to help Georgian stakeholders diagnose and address issues of public concern by providing accurate, unbiased and statistically sound data. This poll aims to capture the most relevant information to foster the development of responsive policies and governance. A wide range of leaders from across the political spectrum has reported that the polls are important to their work and encourage continued polling. The results reflect data collected between July 13-25, through telephone interviews with a nationwide representative sample of Georgia’s adult population, excluding occupied territories, that included 2,016  completed interviews. The average margin of error is +/- 1.3 percent. Respondents were selected using the random-digit-dial method.

NDI’s survey work is funded by the United Kingdom of Great Britain and Northern Ireland through the  Foreign, Commonwealth and Development Office’s Good Governance Fund. 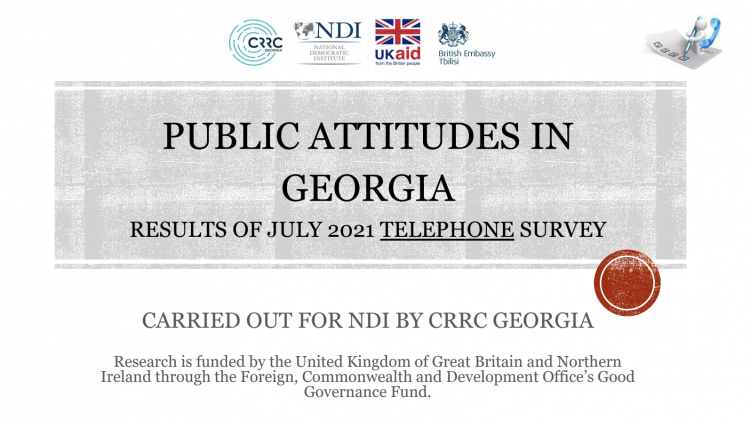 Ukraine shows when democracies unite, it’s a game-changer
Government of Botswana and National Democratic Institute to Co-Host International Summit on Constitutionalism and Democratic Consolidation in Africa
Bosnia and Herzegovina Poll
Pride, a Litmus Test For Democracy
Democracy When You Need It Most: Strengthening Legislative Transparency and Accountability During Crises
How to Deliver (Democratically) Under Pressure